The French Gemmology Laboratory recently had the opportunity to analyse an exceptional jewel. Namely, a gold ovoid-shaped pendant with two aligned circular openings through which light can cross the object.
The jewel weighs 1.96 g and measures approximately 18.9 x 10.1 x 9.8 mm (hook extended).

Upon observing the inside of the object, we were surprised to see the portrait of a woman in the form of a microfilm one millimetre wide glued between two pieces of glass. One of the two pieces is convex, the other planar. Looking directly through the jewellery, the portrait was clearly visible even without a microscope or magnifying glass. 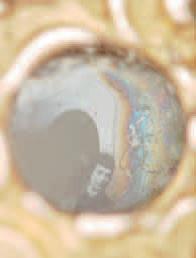 Photo of microfilm through an opening (x120 magnification)

This type of photo-microscopic jewellery was invented in 1857 by René Prudent Patrice Dagron (1819 – 1900).
He used as a microfilm created from collodion (composed of nitrocellulose dissolved in a mixture of ether and alcohol, discovered by Louis Ménard in 1846).
The damp collodion plate soaked in a chemical product had a photographic application (especially for the production of photo film).
It was invented in 1851 by Frederick Scott Archer (1813-1857) or Gustave le Gray but allowed for no more than 30 seconds’ installation time.
As to the microfilm, it was invented by John Benjamin Dancer in 1851, who used microscopes to observe them. He had managed to produce photomicrographs of around 3 mm2. 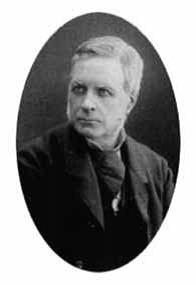 René Dagron, seeing the invention of Benjamin Dancer’s microfilms, came up with the idea of a technique for observing microfilms without the need for a microscope.
For this purpose, he made use of modified stanhope lenses, hence the name stanhope or stanhoscopes attributed to the coupling of this lens with a microfilm, enlarging the microfilms by 300 times (a stanhope lens is a glass cylinder with its two convex ends, one more convex than the other, invented by Charles, Count of Stanhope).
René Dagron changed the stanhope lens by levelling one end and positioning it at the exact distance from the focal plane of the first end.
He sawed the lens in half and glued the microfilm with Canada balsam. The stanhope lens thus modified was small enough to be mounted in rings, pendants, ivory miniatures, crosses, etc. It was a great success with the general public at the Paris International Fair in 1859.
So much so that René Dagron opened a factory in Gex, Ain (France) in 1859 employing up to 60 people and producing 12,000 pieces per day.
He patented his invention in 1860 as photo-microscopic jewellery or microscopic photo-jewellery. In 1862, he published a book, Microscopic Cylinders, set and non-set on jewels.
Eugène Reymond, and later his son Roger, succeeded René Dagron at the head of the stanhoscope manufacturing plant, for over a century, until 1998, when it shut down. 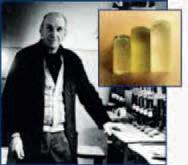 One of the authors (OS) suggested placing a focused light source behind the pendant to see if the portrait could be projected onto a wall. It is thanks to this bright idea that we can behold the portrait today, passed down to us over the years. 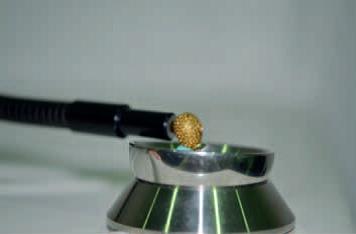 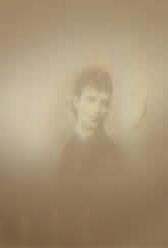 After some research on the markings and portrait, we were able to trace the history of this piece of jewellery, later confirmed by the object’s owner.
The portrait observed is that of Tzarina Alexandra Fedorovna Romanova (1872-1918) married to Tsar Nicolas II in 1894.
The egg containing the portrait was manufactured in Russia by Fabergé for the Imperial Wedding.
It was offered to all the Tsarina’s maidens of honour.
Looking more closely at one of the markings (the one at the bottom in photo X), the mark of the City of Saint Petersburg appears recognisable. 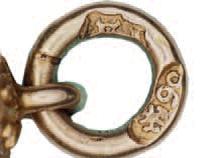 Russian Fabergé mark with the Saint Petersburg mark on the bottom 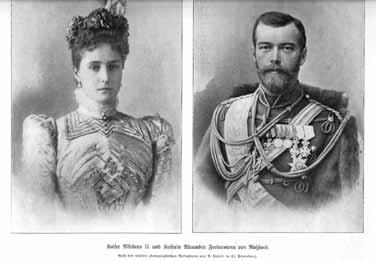 This piece of jewellery, admirable for its ingenuity and history, was rediscovered at the LFG. Looking into the past through an egg was one of the most exciting investigations we had the opportunity to conduct this year.
Even though there is no actual gem on this piece of jewellery, it undoubtedly has exceptional characteristics, in addition to which comes an undeniable historical interest.