An extraordinary doublet mounted on a fine jewellery ring 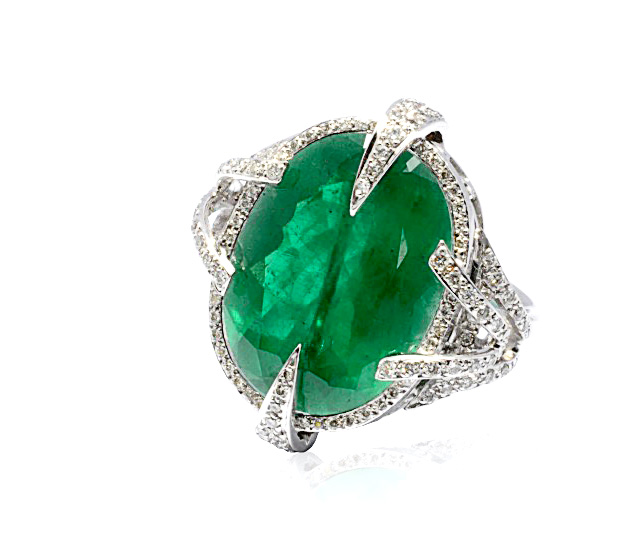 The LFG recently had the opportunity to study a white gold ring, decorated with an oval green stone
Measuring approximately 20.2 x 14.7 x 8.6 mm and resembling an emerald of beautiful colour, accompanied by a paving of small diamonds. The whole is quite spectacular (Figure 1). 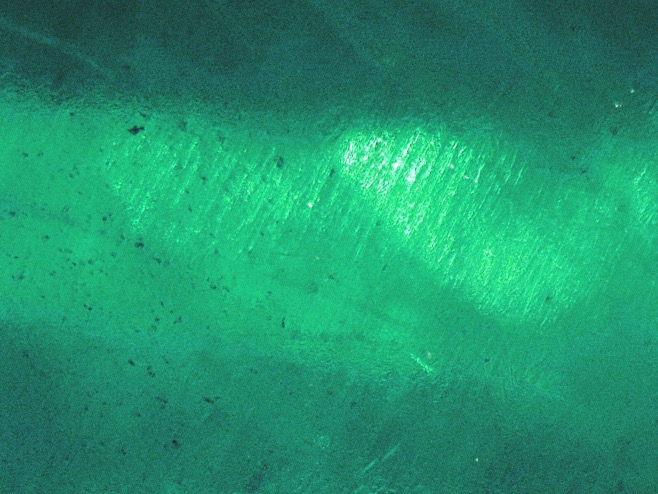 The central stone shows clear, slightly wavy but almost straight parallel growth areas (figure 2), visible to the naked eye and certainly to the magnifying glass, under the table and the crown. The culet shows a frosty pattern composed of droplets that are easily visible under a magnifying glass (Figure 3). The whole is evocative of the residues that form in synthetic stones by anhydrous dissolution. At high magnification, however, it can be discerned that these droplets are actually small cavities with relatively regular geometric shapes. Some of them very clearly show bubbles. The culet is thus a natural gem, despite its misleading appearance. 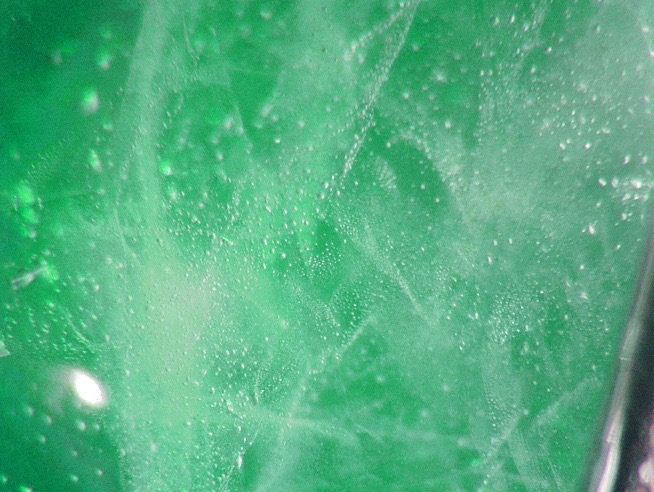 At the level of the polishing, a regular dividing line can be distinguished in a few spots, and probably goes around the entirety of the stone (figure 4). This line is in large part hidden in the setting, and only emerges in one segment of the polishing, where it is visible only through binoculars. This would suggest a separation plane, but is not coloured, contrary to what one would see in a green enamel triplet. 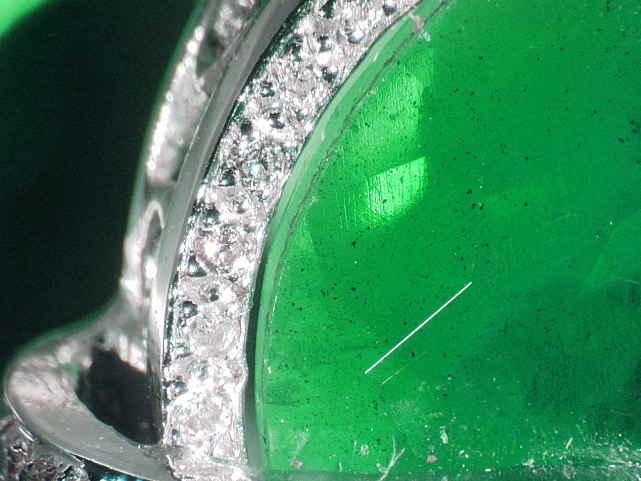 Through the table, small black spots can be made out, some almost hexagonal, all spread out on a plane. This suggests the presence of glue (figure 5). Only the crown appears red under the Chelsea filter. 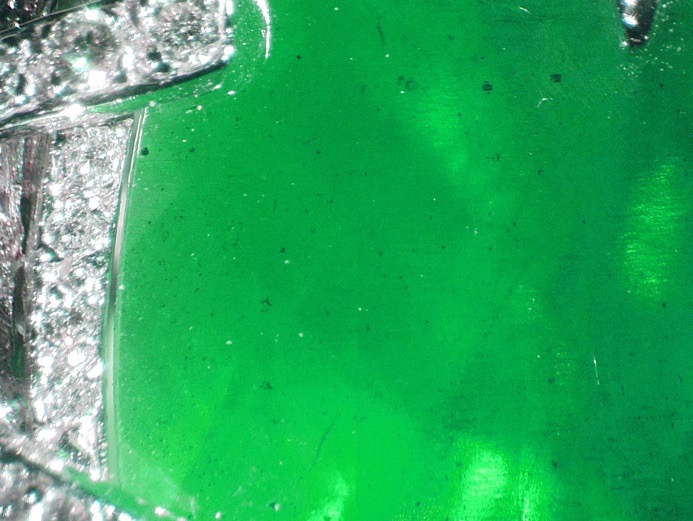 Figure 5: Black spots caused by bubbles in the glue used for this doublet. X 40 (Photo A.Droux)

Under ultraviolet radiation, the upper and lower parts of the stone do not react in similar fashion. The upper part is inert, while the lower part has weak blue luminescence when exposed to UVC, and is slightly milky. The unit remains inert at the UVL.

This is therefore clearly a doublet (Webster 1983 and O’Donoghue, 2006). The refractive index can be measured neither on the table, as the latter is covered by the claws, nor at the culet. 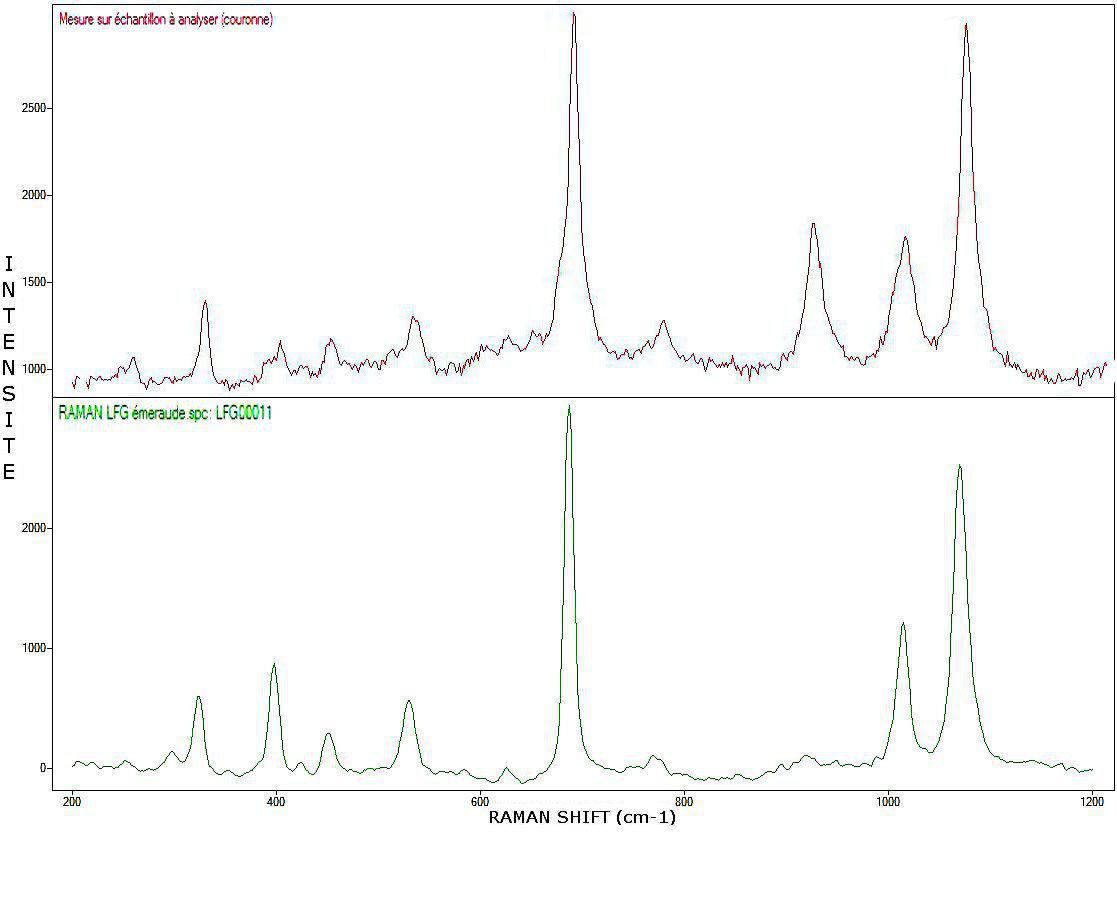 Figure 6: Raman spectrum of the crown compared to a reference beryl from the LFG collection

Identifying the two materials therefore requires a Raman microprobe analysis, the only one capable of providing an objective measurement quickly and remotely in this difficult case.
The spectrum generated on the table is in all respects comparable to that of beryl and was compared to that of a reference emerald from the Laboratory’s collection (LFG00011). As for the one produced on the gem culet, it was compared to sample LFG00027 and identified as that of…topaz! (Figures 6-7). The few remarkable differences are probably due to the different orientation of the samples during measurement. We are thus dealing with beryl/topaz doublet, which is original, to say the least. 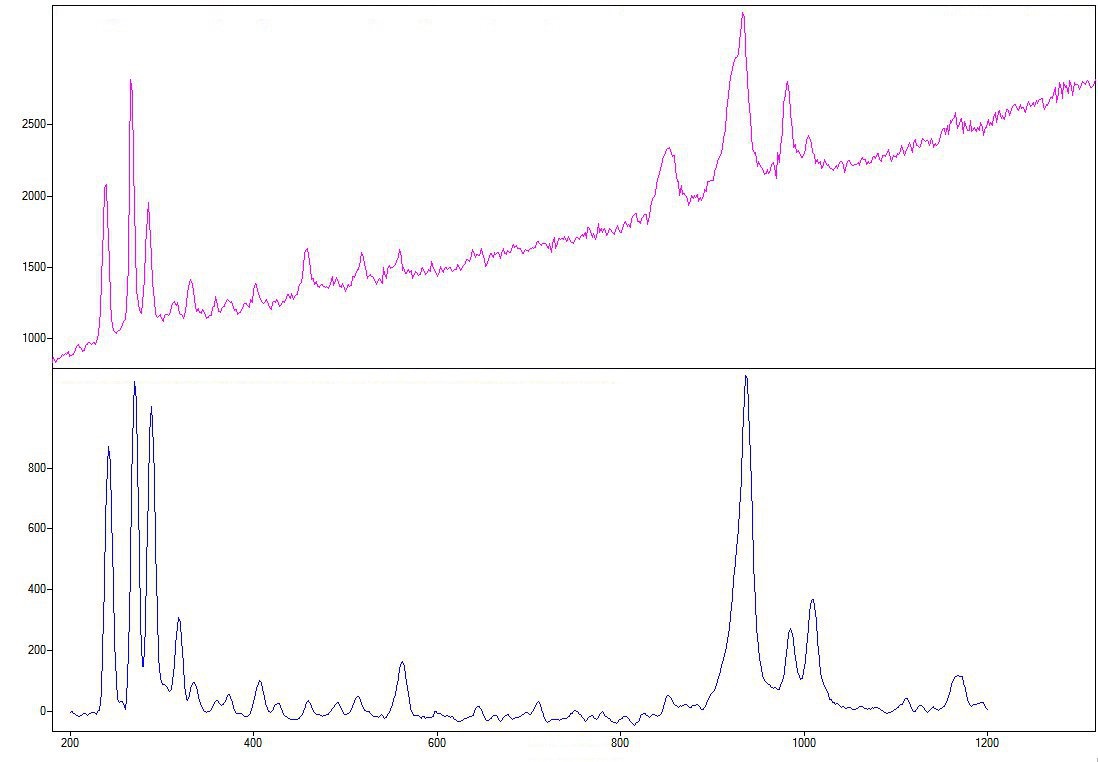 Figure 7: Raman spectrum of the upper section, above, and lower section, below, of the green central stone, proving that it is beryl and topaz.

The exact nature of the material that makes up the crown remains to be determined: is this natural beryl or synthetic beryl? Inspection through binoculars shows the growth features, very similar to those observed in Russian hydrothermal synthetic emeralds (see e.g. Schmetzer, 1996). This can be proven by infrared spectrometry study, using a method non-dependent on the observer. The problem, however, is that we were forced to pass the beam through both materials, given the type of setting. (Spectrum in Figure 8). 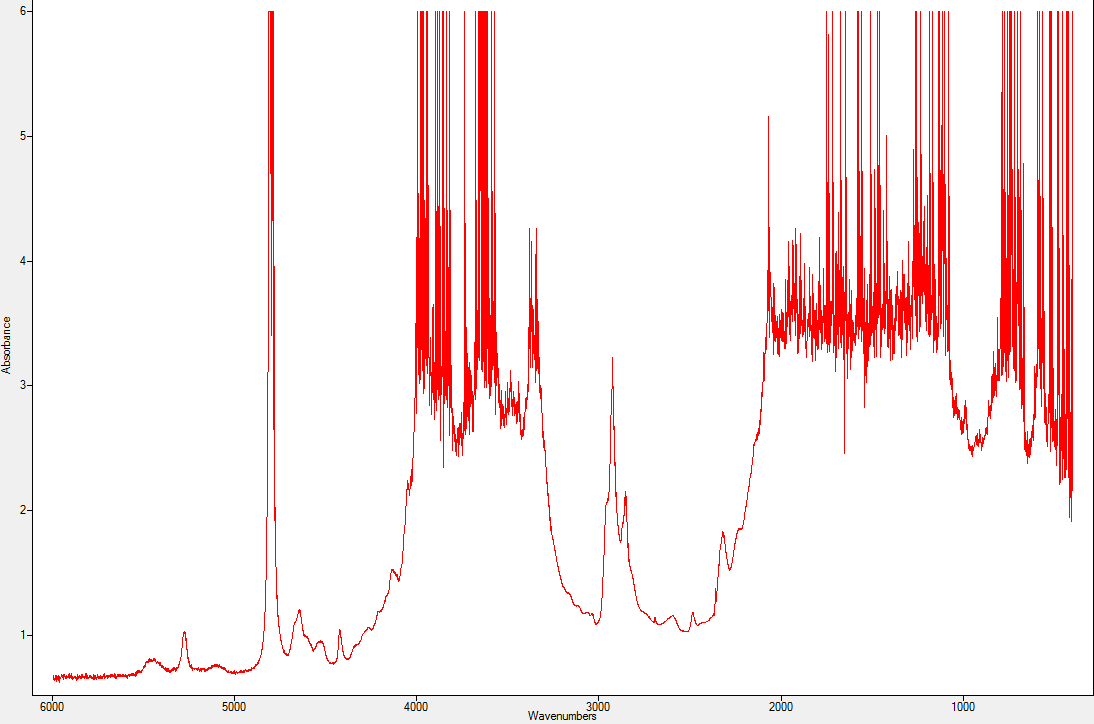 Figure 8: Spectrum produced in the infrared through the doublet’s two materials 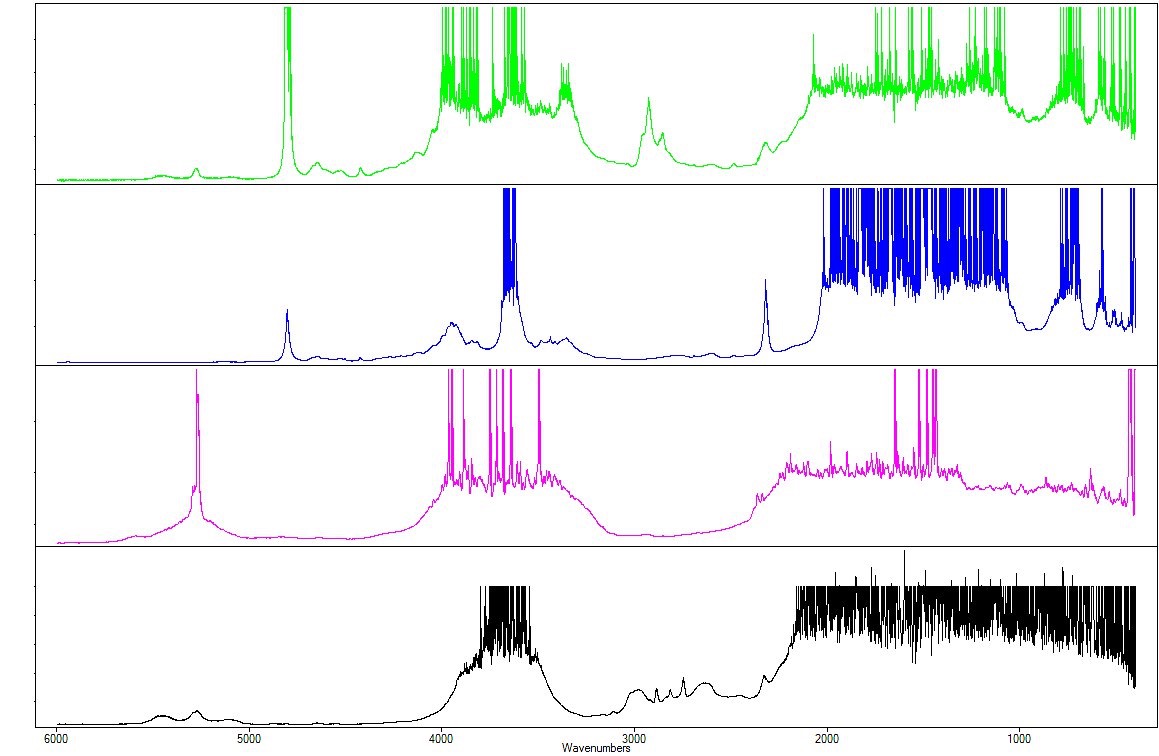 The comparison shows similarities, such as notable absorption between 3000 and 4000 cm – 1 for topaz and emerald, due to the water from fluid inclusions in the structural channels (Schmetzer, 1996). This is a particularity that is logically found in our doublet as well. The large peak that develops around 4803 cm-1 is caused by the OH-hydroxyl ion found in topaz (Shinoda and Aikawa, 1997).

Also observable is shoulder absorption at around 4050 cm-1, which is traditionally found in Russian hydrothermal syntheses (Stockton, 1987), as well as significant absorption at around 2320 cm-1, described in Russian hydrothermal synthetics (Koivula et al p.34, 1996). This is due to low quantities of CO2.
Three absorptions are particularly worthy of note: around 5275, 5450 and 5100 cm-1.
They are found again in the spectrum of synthetic hydrothermal emerald, but show forms and amplitudes very different from those of natural emeralds. For example, the peak around 5275 cm-1 is far more developed in natural emeralds (Nassau, 1980). It is due to type II water, stemming from a relatively high alkaline ion content. In the stone studied, it is barely more developed than the peaks around 5450 and 5100 cm-1. The red appearance of the crown under the Chelsea filter and the presence of Cr in fluorescence X (not detailed here) prove that it is an emerald.

Its spectrometric characteristics prove that it is a hydrothermal synthetic stone. Lastly, its growth features suggest that it is a « Russian »-type synthetic stone (Schmetzer, 1996).
It is now becoming less and less common to find doublets at the LFG, where they are usually seen only in old jewelry. As for the combination of topaz and synthetic emerald, it is quite simply an exceptional occurrence. The jewel’s mounting, along with the very original type of setting strongly suggest an intention to hinder access to certain elements that would identify the nature of the stone, in particular the joint of the doublet and the two materials’ refractive index. This should invite the reader to be very careful about the nature of gems found on jewellery: doublets continue to circulate on the market…