The stones were photographed with a Hirox KH-3000 digital microscope for continuous optical magnification up to 320 times and numeric up to 1280 times.

The largest stone contains a multitude of dispersed particles in no apparent order (Figure 2). A cubic metal inclusion can be seen under the stone table (Figure 3). Rifts oriented according to the faces of the octahedron crop up at the breech. Colourless zones set in « cross-formation » can easily be noted in immersion (Figure 4). These properties have often been described for HPHT synthetic diamonds. The colourless areas are areas of dodecahedral growth, not found in natural diamonds. The second stone is remarkable for its mediocre polish, with numerous occurrences of paste on the table and crown. It also contains a graphite inclusion under the crown (visible in figure 1b). In immersion, when viewed between crossed polarizers, the interference figures are particular, made of « cells » and rectilinear areas (Figure 5a). In profile, the parallel sheaves or « brush » appearance is perfectly visible, whatever the direction of observation. This appearance is very similar to that described by Martineau in 2004 on CVD synthetic diamonds (Figure 5b). Such structures are very uncommon in natural diamonds. Thus, from as early as binocular observation, the two stones are strongly suspected of being synthetic diamonds, resulting from two different methods. 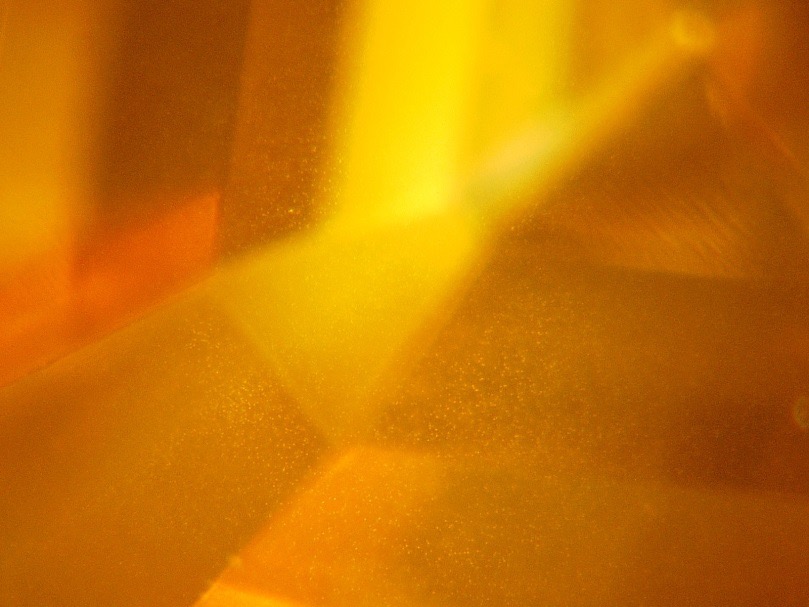 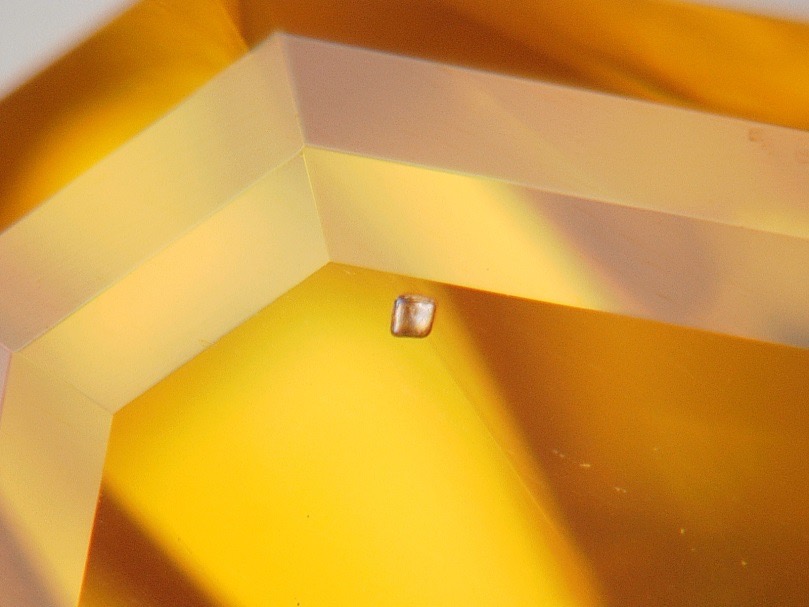 Figure 5: Alveolar and fibrous or « brush » appearance of the second stone observed in immersion in alcohol between crossed polarizers (magnification: a – x40 and b – x60)

Figure 6: Luminescence reactions of the two stones analysed under UVL (365 nm) and UVC (254 nm). The first stone has a zoned green yellow cross-shaped reaction with a slightly more intense reaction to UVC. The second stone is inert in UCL and slightly pink orange in UVC. 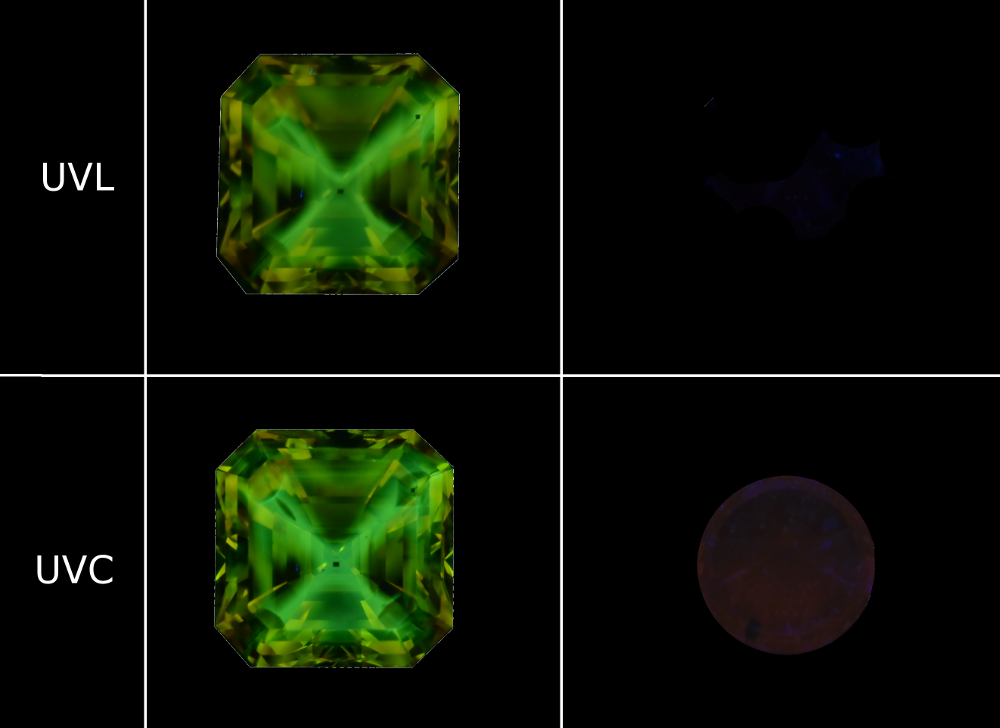 Ultraviolet (UV) luminescence is an important criterion for identifying synthetic diamonds. We used a 6 Watt UVProducts UVGL-58 lamp. The yellow diamond reacts strongly with a zoned yellow-green luminescence (in cross formation) when exposed to ultraviolet long radiation (UVL 365 nm), which is slightly more intense with short ultraviolet radiation (UVC 254 nm). The second diamond is inert when exposed to UVL and slightly pink orange when exposed to UVC (Figure 6). Fluorescence levels that are higher in response to UVC exposure than to UVL exposure offer the gemmologist with an excellent indication that a diamond might be synthetic, particularly in the event of a coloured diamond. This behavior is extremely rare in natural diamonds. Nonetheless, the intensity of the luminescence when exposed to short UV depends greatly on the power of the lamp, the distance between the lamp and the object, and the observation environment: total darkness is recommended to observe low luminescences such as those of the second stone. 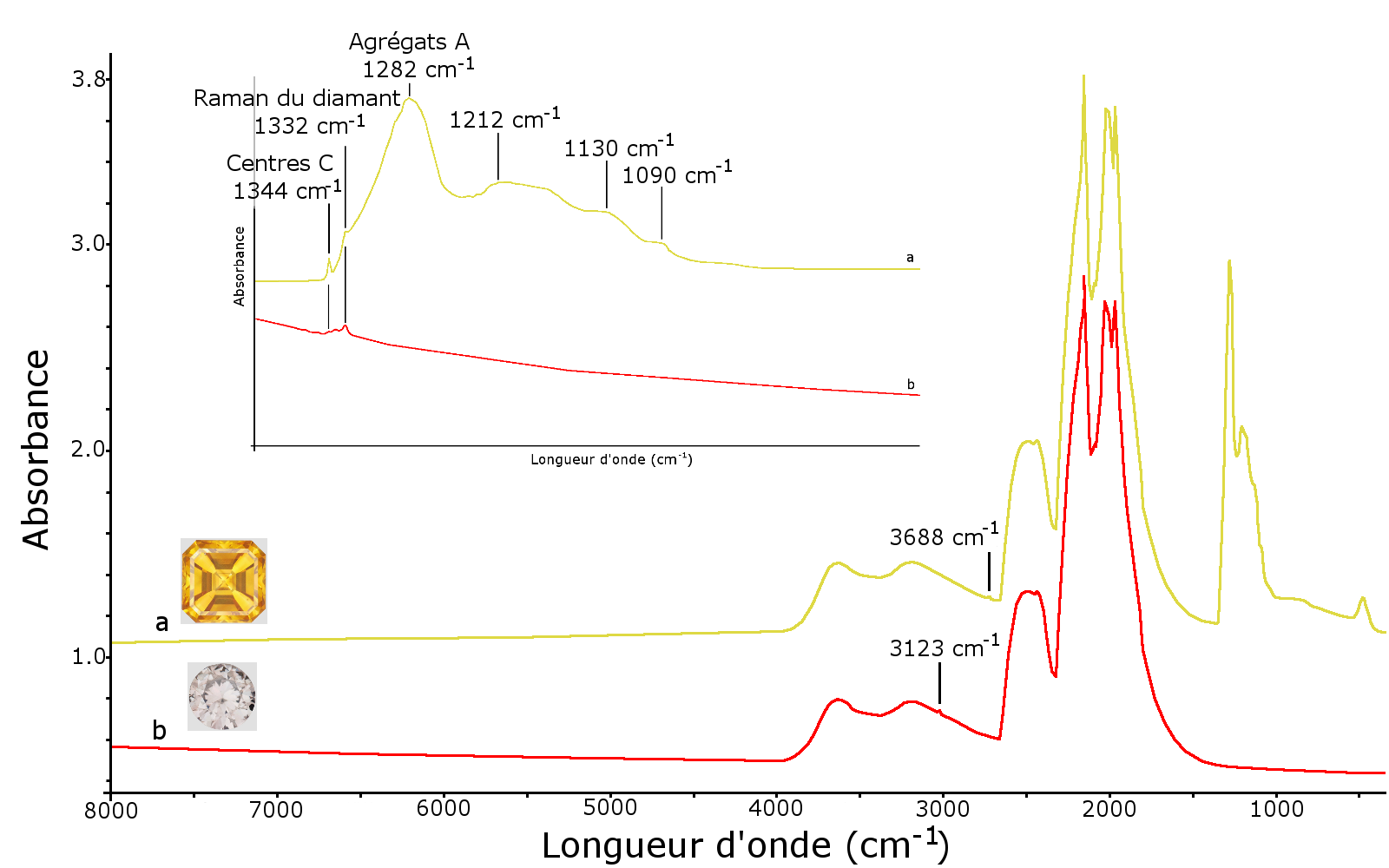 To characterise the materials, we used Nicolet Magna 560 IR Spectrometer Infrared Fourier Transform. The infrared spectra were obtained from 8,000 to 400 cm-1 at a resolution of 2 cm-1. The first stone is a diamond containing nitrogen in aggregate form (aggregate A or pair of nitrogen atoms at 1282, 1212, 482 cm-1) and in isolated form (centre C at 1344, 1130, 1090, 1045 cm-1). The harmonic at 2688 cm-1 of the band at 1344 cm-1 due to centres C and the Raman band of diamond at 1332 cm-1 are visible in the infrared spectrum (Figure 7). The presence of A aggregates indicates high-pressure high-temperature treatment after growth (Shigley et al., 1993). This is common enough to adjust the often overly-dark colour of synthetic yellow diamonds.

The second stone is a type IIa diamond, i.e. without nitrogen detectable using infrared spectrometry. However, by expanding the scale of the infrared spectrum, a thin band at 1344 cm-1 due to the presence of a few isolated nitrogen atoms, as well as a band at 3123 cm-1 due to the complex [N-V-H]0 (Martineau et al., 2004) can be seen. The absorption at 3123 cm-1 is characteristic of CVD synthetic diamonds

Figure 8: UV-Visible-PIR spectra of the two stones analysed. a – yellow diamond spectrum marked by a band at 377 with a shoulder showing maximum absorption of approximately 464 nm and smaller bands at 529, 555, 690, 715 and 735 nm. The latter having been attributed to the presence of nickel. b – the spectrum of the second diamond with a broad band at 270 nm indicating the presence of isolated nitrogen atoms, another broad band at 688 nm and a narrower band at 737 nm due to the presence of the Si-V centre. 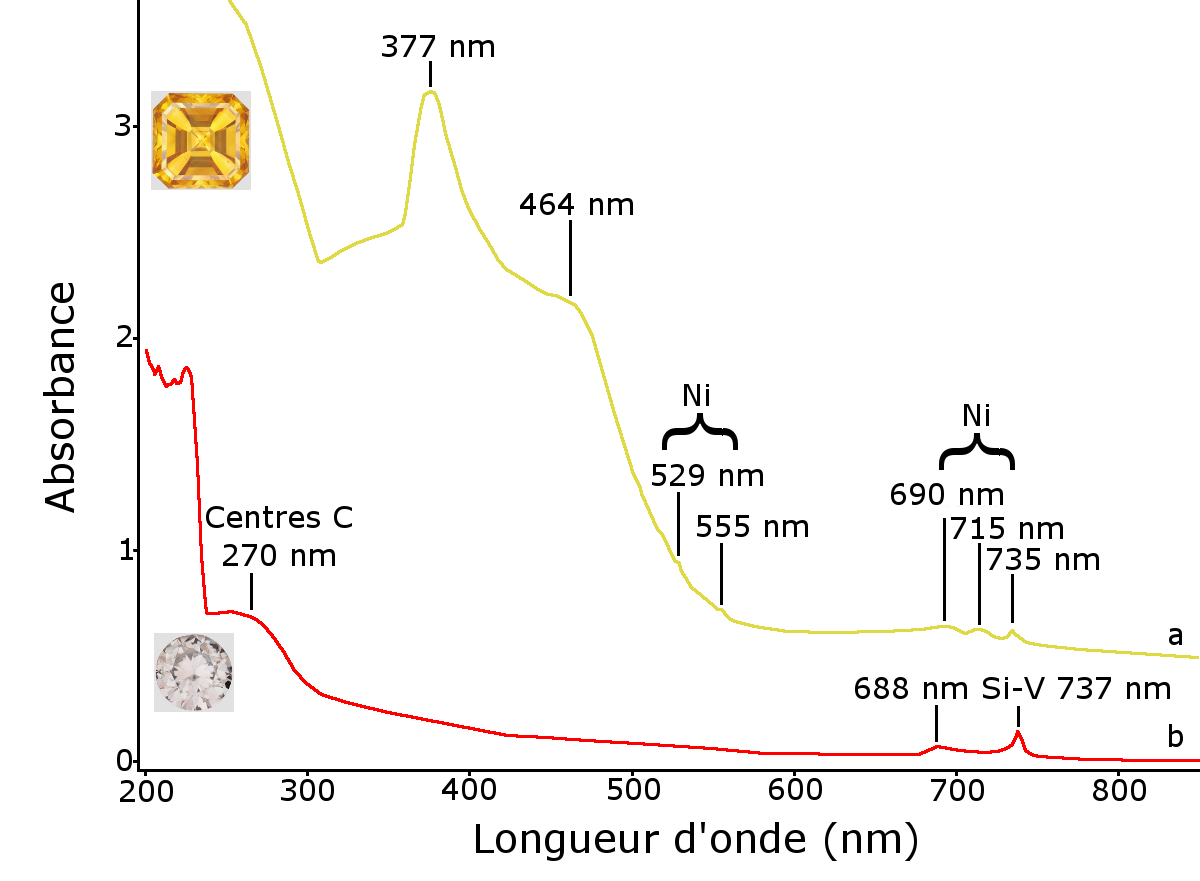 The causes of the colour were analysed using a Jasco V670 infrared UV-Visible-Close spectrometer. The infrared spectra were obtained from 200 to 1000 at a resolution of 1 nm. The yellow diamond’s UV-Visible-PIR spectrum is characterised by an overall increase in the absorption of the near infrared up to the UV, causing the yellow colour. A fairly broad absorption band of approximately 377 nm (approximately 30 nm wide) with a shoulder showing maximum absorption of approximately 464 nm can also be seen. Far less intense and far thinner bands should also be noted at 529, 555, 690, 715 and 735 nm (Figure 8). All of these bands have already been listed in Russian-made HPHT synthetic diamonds with HPHT treatment and have been attributed to the presence of nickel (see p. 241 of Shigley et al., 1993), probably trapped by nitrogen. This type of spectrum, in particular the bands at 377 and 464 nm, has never been documented in natural diamonds. The second diamond’s UV-Visible-PIR spectrum is characterised by absorption at 737 nm due to the Si-V centres as well as one at 688 nm, and a wide band centred at 270 nm due to Centers C (see for example Zaitsev, 2001, pp. 343-344). These bands are often found in CVD synthetic diamonds that are not “ultra pure” (Martineau et al., 2004). The absorption background resulting in a brown-grey colour is linked in the CVD synthetic diamonds to the presence of traces of nitrogen, and therefore entirely consistent with the infrared spectrum. 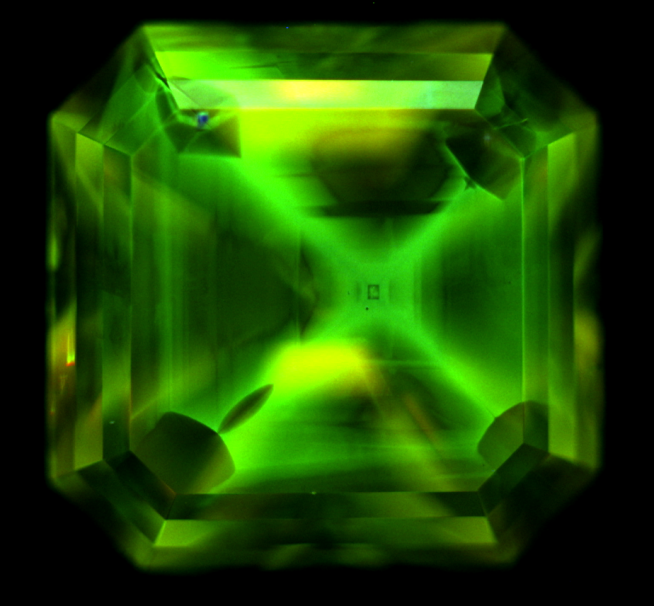 DiamondView, a very short wave length luminescence imaging device (225 nm), makes it possible to observe diamond growth morphologies. The DiamondView image of the first diamond shows a cubo-octahedral “cross-formation” growth typical of HPHT synthetic diamonds (see for example Figure 9, Shigley et al., 1997). The DiamondView image of the second diamond shows an orange luminescence caused by the presence of N-V0 centres. A striation parallel to the table similar to that of the glass garnet doublets can be seen by looking at the diamond table from above. In profile view, parallel striations can also be noted (Figure 10). These striations are a criterion for recognising CVD synthetic diamonds (Martineau et al., 2004).

Figure 10: DiamondView images of CVD synthetic diamond, orange luminescence is due primarily to N-V centers, the successive layered structure is visible on both images. 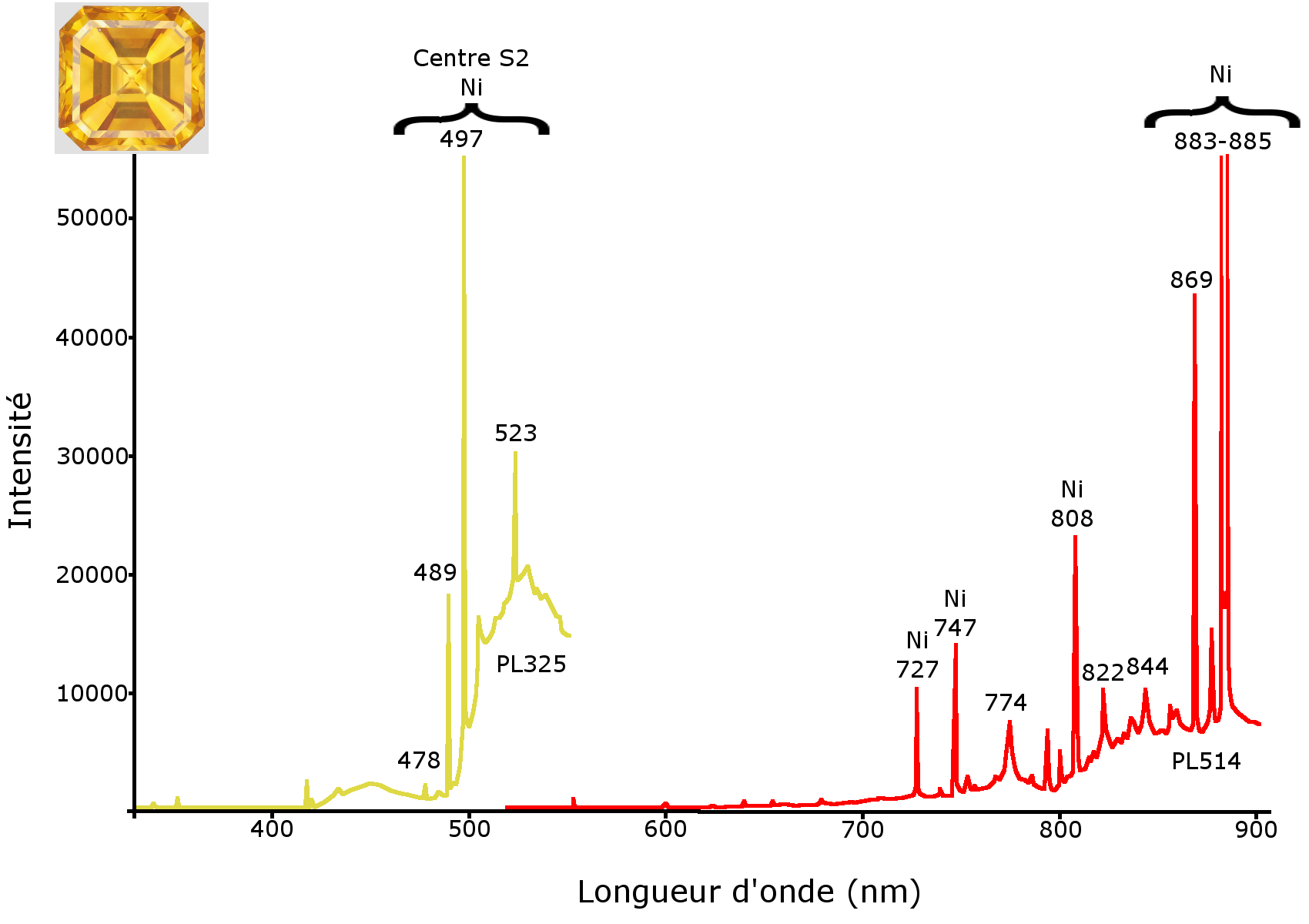 This is the first time that isolated HPHT and CVD synthetic diamonds larger than “melee” diamonds are submitted to the French Gemmology Laboratory for analysis. Through classic gemmology, the HPHT yellow synthetic diamond can be easily recognised, for example based on the presence of colourless sectors and metal inclusions. The identification process is more difficult with the CVD synthetic diamond. The short UV transparency points to classification amongst the probably type IIa diamonds, those with a risk of being synthetic or HPHT-treated. With a powerful UVC lamp, the low orange luminescence when exposed to UVC can also be detected, giving reason to suspect CVD synthesis. Observation of the “brush structure” in immersion between cross polarisers is sufficient to confirm this suspicion. 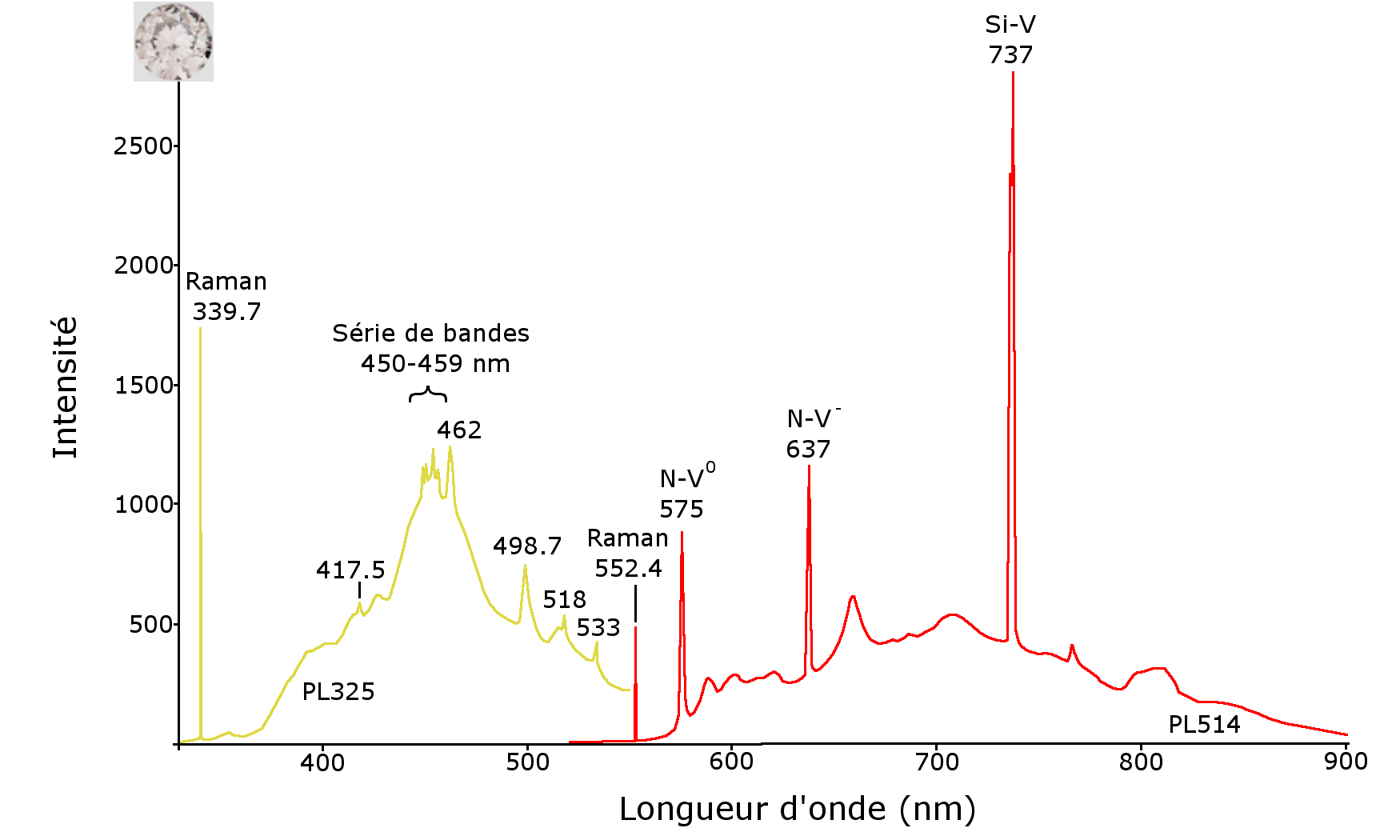